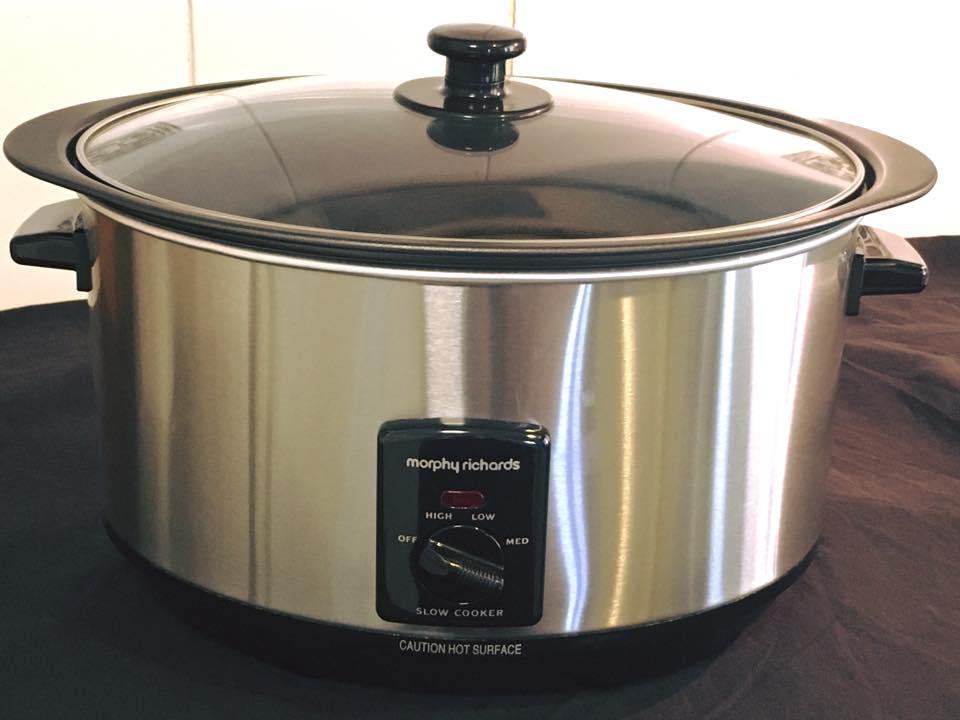 If you are looking for a large searing slow cooker, the Morphy Richards Sear and Stew Slow Cooker may be just the one for you!

Recommended by Choice in March 2016, the Sear and Stew Slow Cooker has lots of great features.

FEATURES
It’s an impressive looking unit on your bench or in your collection with its brushed stainless steel finish making quite an impact.
It has the option of 3 cooking settings: Low, Medium and High
It features an oval shaped 6.5L capacity aluminium inner pot, with non stick coating that allows searing on stove top (see below for more details on searing feature)
It also features a toughened glass lid to view cooking in progress
The slow cooker has cool touch handles and non slip feet for added safety
The purchase includes a 2yr warranty for domestic use
The lid and inner cooking pot are also dishwasher safe which is great!

SEARING FEATURE
The best feature of this Morphy Richards Sear and Stew Slow Cooker is the searing feature.
One of the great benefits of slow cooking is convenience.  Many like to add ingredients, turn on and walk away and let dinner cook itself.
What then of the recipes that suggest pre browning/sealing of the meat prior to slow cooking?
Sure you can do that in a pan on the stove but that’s extra dishes and trouble.
Enter the searing slow cooker!
You lift out the inner cooking pot, put it directly on your (non induction) stove top and brown/seal right IN the slow cooker bowl.  Once done it’s as easy as lifting the inner bowl off the stove and moving it straight back into your slow cooker unit, ready to begin slow cooking.
No extra dishes and no losing those flavour packed morsels that are in the browning pan.  All that taste and flavour stays right in your slow cooker dish where you want it!

Naturally I wanted to give this slow cooker a try myself so I chose a recipe that required pre cooking to make the most of this searing option.
We trialled it by cooking ‘Smoky BBQ Chicken with Bacon‘

BEFORE USE
Whenever you use a slow cooker for the first time it’s important to read the manual.
The Morphy Richards Sear and Stew Slow Cooker manual includes great info on safety, handling, features, tips and trouble shooting.  As well as some recipes to get you started.
First step with any unit is always a good wash first of the lid and inner bowl that you will be cooking in.
The outside casing of the appliance should never be in contact with water!
A quick wash of the inner bowl and lid with warm soapy water and we were good to begin cooking.

Let’s Get Cooking!
For this recipe we needed to use the stove top searing pot to seal our chicken and bacon.  So easy to do with the Morphy Richards Sear and Stew Slow Cooker.  Straight in the pot and straight on the stove.
A dash of oil, added the chicken and bacon and seared until sealed (a great way to lock in the moisture for your slow cooked meats)

After this step we simply lifted the entire inner pot and lid off the stove and into the slow cooker.
Adding the other ingredients, giving it a stir and preparation was that easy!
All those great flavours kept right in our dish and no extra mess.

For this recipe we then placed the lid on, turned it to Low for 4hrs and dinner was sorted.
The Morphy Richards Sear and Stew Slow Cooker made the entire process easy and hassle free 🙂

Served with creamy mash and steamed green vegetables, our dinner was a hit!
And washing up was a breeze!  Easy to wipe out with nothing sticking to the pot.

Thanks Morhpy Richards – I’ll certainly be using this slow cooker a lot!

CONGRATULATIONS Tracy ? … Morphy Richards will be sending your prize directly to you :))

And thanks to everyone who entered ?
We wish you could all be winners!